An Interview with Sean T. Page

Sean T. Page is the author of The Official Zombie Handbook (UK) from the Ministry of Zombies in the UK. It a fantastic resource that has been highly rated by reviewers and users. I also reviewed the book and was so impressed by it, that I wanted to conduct an interview with the author to learn more about the book. Page agreed to an interview which transpired through email during the past couple of days. I’m pleased to present the interview transcript: 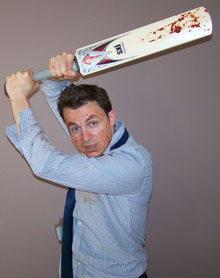 Q. Hello Sean, and thank you for taking time out of your busy schedule to answer a few questions about the book. I found it quite impressive, and I discovered quite a few challenges to surviving the coming zombie apocalypse that are unique to the UK. What was your motivation for writing the book?

I’ve always loved zombies – books, films, everything I could get my hands on. Like many, I watched the old Dawn of the Dead & was hooked. So, the book really followed on from this. You can’t help wondering how you would survive. In the movies, people are always well-armed but not everyone is in that situation. What would happen if you were at work? What kind of supplies would you need to lay down to survive?  For me, this was a gap – in other words, the detailed survival stuff…

Also, I know the outbreak studies are UK-based but I’ve had a lot of feedback from American readers who don’t have guns in the house or live in one the large cities – many of the challenges are the same as for someone here.

Q.  I enjoyed your outbreak studies; they are well thought out and plausible – an oil port, a clinical research facility, and an airport are all great locations for an outbreak.  I know you mention hospitals as a bug-out location to avoid, but I was wondering if you gave any thought to a hospital being the site of an outbreak?

I certainly stand by the comment that they are a ‘no go’ area. During the planning work for the book, we ran a few simulations & in some, ‘patient one’ was taken to hospital & led to an outbreak scenario there but in most, the virus spread so quickly that it was the entry point into the country that was the problem or the point of origin (in the case of the scenarios included a lab). It is important to take into account that our hospitals are not really built to take the kind of numbers produced by a major crisis & they certainly can’t deal with the living dead.

Q. On page 67 of the book, you provide a template letter for citizens to mail to their MP Representative in the House of Commons, encouraging the government to plan for the zombie apocalypse. Have you received any summons from parliament or visits from MI5 asking you to stop creating hysteria amongst the masses?  Do you find yourself looking over your shoulder to see if anyone is following you? 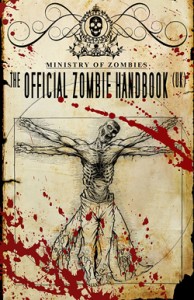 The House of Commons has been very uncooperative. I place the threat of a zombie outbreak on a par with the current financial crisis but my local representative at the House of Commons is most uninterested. I have had more luck in the House of Lords, where the aging Lords & Ladies seemed more interested in my cause. I have however been banned from attending the House after an unfortunate incident with a freezer bag last summer but I hope to have a question raised by Lord Bath in October.

I would encourage everyone to canvas their government representative. Zombies are my main concern but you’ll also pick up from the book that I have worries about sustainability, energy, the volume of imported food & self-sufficiency in general.

Q. I agree – even while focusing on the zombie apocalypse, other concerns are uncovered that will apply to any type of disaster or apocalypse. You’ve obviously done a tremendous amount of research in preparation for the book – how is that you know so much about possible survival locations such as the Victorian sea forts and other coastal forts, oil rigs, nuclear bunkers, military bases, underground havens, etc. – do you work for the government?  If not, how do you explain your extensive knowledge?

I have been lucky enough to have access to some unique databases of information. For example, my section on oil rigs was from an experienced offshore operator & so I have to be careful around any security issues. Nuclear bunkers was all my own work (see aforementioned freezer bag incident & ban from the House of Commons above). The military input was intensive interviews with some serving and ex-forces. There is some good information on the Internet but nothing can replace visiting sites like the Victorian sea forts. Just stick “No “Man’s Land Fort” in Google & you’ll see I’m not making this stuff up.

Q. I must say that firearms are part of any zombie apocalypse survival plan here in the US, and after reading your book it scares me to think of not having access to lots of guns and ammunition when the uprising occurs.  Do you really think it is possible to survive the zombie apocalypse with cricket bats and sharpened pub darts?

I won’t pretend it is going to be easy but as a prominent Chinese Red Army General once told me “You can’t miss fast enough with a gun”. It’s true, we don’t have many guns here in the UK & it’s the same for much of Europe, Japan etc. Sometimes I think the best we can hope for is to hold out until help arrives. Saying that. I have found the cricket bat to be a fantastic weapon – the darts were less successful in trials. We just have to be creative. I have great faith in the crossbow.

Q. I hope everyone in the UK reads the book because I think that the best chance for your survival depends on the knowledge and advice you have provided in the handbook.  At first I was worried for the UK, but as I read through the book I began to feel better about it.  You seemed to have thought of everything.  One thing I noticed in your book was something I’ve not seen in any other survival manual – the special section for helping people with disabilities prepare for the zombie apocalypse.  You must be a very caring person to have the foresight to include this in the handbook.  How did this come about?

I do think a lot of guides read like military textbooks & just assume that everyone is of a certain profile, age or ability. I did want mine to be broader. I think our best chance to survive in any zombie crisis is to make use of the whole community – everyone has something to offer. For example, I was interviewing a wheelchair user about transport & we got chatting about the book & zombies. I quickly saw that wheelchair users already do a massive amount of planning into say just moving across London or New York on the tube or metro. These kinds of skill are vital in survival.

Also, what really ticked me off were the emergency guidelines for people with disabilities which on the FEMA site pretty much boiled down to hanging a white sheet out of the window & shouting ‘survivor here with supplies, please come & loot me’. In terms of dealing with a zombie outbreak, they just didn’t make any sense.

So, I tried to include details of weapons for wheelchair users, advice for folks with hearing disabilities etc – we are all part of the community & we’re gonna need every human to defeat the zombies.

Q. In your weapons discussion, you had a scoring system of durability, ease of use, availability, and damage.  In the melee category, I noticed the common hammer had the highest ratings, followed by the cricket bat.  I think a good ¾ kilogram framing hammer is awesome, too.  What kind of weapons experience do you have?  This could include beating inanimate objects in fits of rage…

Well, I didn’t include guns and I’m not an expert in this area & there is a lot of information out there on firearms. They are a bigger part of my next book, War against the Walking Dead, which is about how society can fight back & take the country back from the ghouls but I got an external expert in for this part.

Anyway, many objectives including life-size dummies & large fruit were smashed in the name of zombie defence. I learnt to love my trusty cricket once more & developed a healthy respect for the ice axe & what it can do. I do enjoy smashing things up. One of the worst weapons was the golf club – that was rubbish at bashing things with.

Q. I’m glad you mentioned your next book, War Against the Walking Dead, because I wanted to ask you what projects you are currently working on and what we expect next from Sean T. Page.  I certainly want to hear more from you.  Can you tell us a little about the book, your research, and when we can expect a hard copy?

War against the Walking Dead has been a major project for me. Not only mine but most zombie guides tell you how to survive the zombies & don’t get me wrong,  there are some great survival guides out there. My next book is about leading the fight back, it’s about taking the various survivor groups & creating a force capable of defeating the zombies.

It’s going to be crazy. There are essays in there on the latest advances in zombie science. There are guides to the various survivor groups you are going to encounter. And, there is the stuff you need to build an army, navy, air force & even special forces from the ashes of human civilisation.

As I mentioned, it has been a major piece of research – again, I think it will appeal to real zombie fans across the world. I’ve linked up with zombie experts from the US, Australia, even the Philipines……..

It’s really about what to do once you survive the initial zombie outbreak – what next? How should you lead the fight back?

Q.  Thank you so much for agreeing to the interview; your effort is much appreciated.  In closing, is there anything you want to talk about or say to your fans or the general public?

Only thanks for the kind words of support so far & the suggestions. People have sent emails on everything from crossbow usage to the role of railways in a zombie outbreak. So, cheers for that & I hope you enjoy the books.

This entry was posted in Books, Interviews, News/Events. Bookmark the permalink.