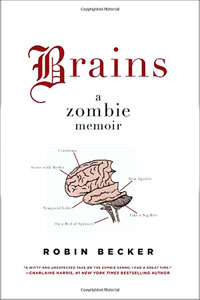 Another debut author novel, another novel from the zombie perspective, another great read. Lately there are lot of debut zombie authors and a lot of new books coming from the zombie perspective, and yet I am still being surprised because each one of these novels are completely different and provide a new perspective that hasn’t been done before. With her book Brains, Becker has written a funny yet heartwarming story and has managed to turn a zombie into a hero.

The book opens with college professor Jack Barnes and his wife fighting off a zombie horde attacking their house in a small Missouri town, and they’re running out of luck. They retreat to the basement and lock themselves in (I know better, but they didn’t) and of course things go bad. It turns out the professor has already been bitten in the fighting and now he is locked in the basement with his wife. There is a funny but sad dialogue between them as they figure out that this is not a good situation. I enjoyed the dialogue, but wish it would have ended better. The result is that zombie Jack Barnes is born and he found something to eat as soon as he turned. The amazing thing about zombie Jack is that he can still think and even write – he begins a diary of his zombie life and this is the zombie memoir mentioned in the title -  a very clever premise.

Jack wanders aimlessly with other zombies, but immediately notices how he is different from the other zombies who seem not able to dodge a weapon or hide from their attackers. They provide good cover until he finds a home in a pickup bed under a tarp, and gets driven to a truck stop where he meets a pregnant girl named Eve that he had just bitten, and they head off together, walking through cornfields and roads – anywhere to get away from the truck stop. They run across an army unit, get captured and caged with some other zombies who had been captured.

It turns out that in this cage are some mindless zombies but also a few that are different like Jack. One, named Joan, was a nurse and still could think and heal the wounds of the zombies, and another named Guts could think and also had the coordination to move fast on his feet. Jack was able to draw pictures of an escape plan and relate that to the other zombies and they did manage to escape. During the escape, one of the soldiers turned into a zombie but could still manage to talk – he joined the group along with Jack. Thus began the journey by a rag-tag team of super-zombies who travel to try and find someone in authority to let them know that they are thinking, capable zombies who should not be killed.

The story is very entertaining, has a sense of humor, and is one of those books you don’t want to put down. It’s an easy read of 180 or so pages, and will leave you with an entirely different point of view of the coming zombie apocalypse. This is another must-read for anyone who is into the zombie thing, and a great read for anyone else. Recommended!