Every once in a while, something comes along in the zombie genre that changes everything; sometimes it’s a book, a game or a movie – this time, it’s a movie. I have been fortunate enough to receive an advance copy of the movie script for “Heart Land”, a zombie apocalypse movie being filmed by Center Mass Studios. As I read the script, I became more and more excited – this has never been done before – a zombie apocalypse movie where the only characters are children. 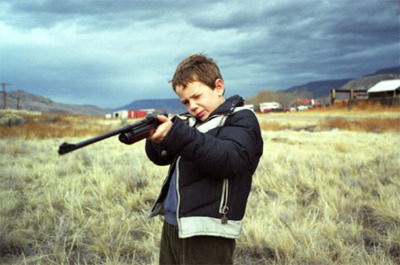 Have you ever thought about what would happen to the children during a zombie apocalypse? The adults are all dead – either turned or killed, and the children are left to fend for themselves. Will they organize themselves? Will they create law and order? Will they act like adults? Will they survive? “Heart Land” handles this subject in a realistic and exciting way – through the eyes of a young child exposed to the apocalyptic atrocities on an every day basis as they fight to live, eat, and provide for all the children orphaned by the zombie apocalypse.

No child should have to go through this, and it’s something we don’t want to experience,  yet we’ll be glued to our seats as we watch ten and twelve year-old children trying to survive in a land devastated by the zombie apocalypse. The movie is the brainchild of Matthew Collins, who wrote the script and will be directing the movie, which has been described as “Lord of the Flies” meets “28 Days Later”. Produced by Delfine Paolini, who is no stranger to film, it promises to be a blockbuster. This has not been done before, and I don’t think I’ve read or seen a story like this since “Lord of the Flies.”

Kids can be brutal on a day-to-day basis, but add in the zombie apocalypse and you can imagine what might transpire. Collins managed to capture children’s behavior and mindset in a gripping story that you will not want to miss.  You will witness some of the older children trying to bring reason to the madness, only to be challenged by tougher and younger adversaries.

The story revolves around Jonah, a young boy who learned how to hunt and shoot from his grandfather, and actually had to put his grandfather down when he turned. He matures quickly, but with his good heart and morals he has trouble fitting in with the many other children who lack his moral character. He hooks up with Wendy, a more mature teenager who manages to keep  her group of children alive by securing a farmhouse and making daily raids of the area for food and ammunition. It is on one of these raids that Jonah meets another group of children being managed by an unscrupulous boy soldier, and Jonah is not experienced enough to determine if they are friend or foe.

I don’t want to give away the ending or the middle of the movie, but let’s just say that Collins has created a believable scenario with lots of action and anguish. This is a movie that has the potential to go big – the possibilities are endless given the addition of children to the genre. I was able to interview the author and producer of the movie, in order to gain some insight and motivation into this great script. Can’t wait to see the movie; it’s a psychological insight into the minds of children faced with no hope and no future – fantastic!

If you want to follow the movie’s progress, here are links to the movie’s twitter feed: http://twitter.com/#!/HeartLandMovie, and here is the link to the movie’s Facebook page: http://on.fb.me/-HeartLand

This entry was posted in Movies/Music/Audio. Bookmark the permalink.