Interview with Chris Wade, Author of Promiscuville: Rise of the Dead 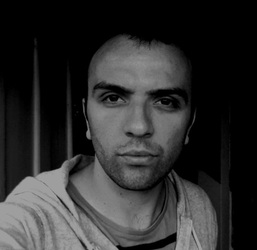 I was able to interview Chris Wade about his new book, Promiscuville: Rise of the Dead, which I recently reviewed. The book promises to be a big success, and I hope we see more zombie fiction from Wade in the future. The interview took place over email, and I hope you enjoy it as much as I did.

WZ: Thank you for taking some time to answer questions about your book, Promiscuville: Rise of the Dead. You’re not a new author, but I think this is your first work in the zombie genre, right? When did you start writing and what led you to writing this book?

CHRIS WADE: This is my first zombie fiction book yeah. I started wriitng as a kid, very odd surreal little stories, and I also used to do zombie comics when I was about 13 because I was mad on Romero’s films, especially Day of the Dead. I started giving writing a proper go in 2009, when I did a book on the ex Stranglers singer Hugh Cornwell, which he sold on his tour and Hound Dawg Magazine, a free arts thing I still do now when I get the chance. I’ve done a range of stuff, books on Romero’s films and fiction audiobooks with comedians like Rik Mayall and Charlie Chuck, but I have always wanted to craft a zombie story and I finally started it at the back end of last year. I finished it in February and I really enjoyed doing it.

WZ: What is your process for writing – do you have a routine time of day, place, etc.? How do you stay motivated?

CW: I have an office that I almost religiously go to and I always write something every day. I get up early too, around 7 or 8 everyday and always go check emails and do things in the office until dinner time and then see where I go for the rest of the day. It’s a kind of natural thing for me really, so there’s no conscious decision made to devote time to writing. I stay motivated because I can always find something to write, whether it’s a song, something towards a novel, an article for the magazine, a review or a short story.

WZ: I have to ask about the book’s setting: the town and its characters. A crazy lady who allegedly killed her husband, perverted psychiatrists, secret criminal gangs, unscrupulous people – are you making a statement about sin and what happens to bad people who do bad things? Perhaps a zombie apocalypse will equalize things?

CW: Yeah that is exactly what I was going for and I am glad that is easy to pick out from all the chaos. Certainly I love zombie gore but I wanted to make some points about society too. England is not in a good way at the minute and I wanted this to be reflected in the book. The class system and its snobbiness is explored with the two characters Reginald And Stanford and I even touch on the lootings  that happened in England last summer with some hoody type criminals who take advantage of the zombie outbreak and raid the shops. That careless and materialistic side of society bothers me too. But I was imagining how people would react if hell rose out of the badness and gave them a taste of their own medicine. 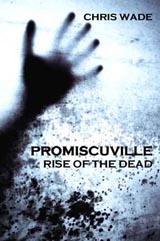 WZ: Why did you name the town Promiscuville? There’s very little sexual activity going on there, at least overtly.

CW: There’s a lot of sexual activity going on there because there’s a lot of prostitutes and perverts there; what a lovely little place eh? My girlfriend came up with the town name because it sounded mucky and scummy, which that place really is. I just loved the name. I thought it was very unusual sounding and maybe would get people wondering what it’s all about.

WZ: What are you working on now? Are there more zombies in your future?

CW: Maybe next year I want to start another book in the Promiscuville series, following other characters at the same time. There’s an audiobook of Promiscuville coming out soon and I’ve got other projects that need sorting out first, but I would love to revisit the genre again when I can. I loved writing about zombies so much!

WZ: Do you think you will survive the zombie apocalypse? Would you want to?

CW: Not sure about this. I was always a fast runner so maybe if it was Romero zombies I’d be able to run away from them, but if it was rage type zombies I’d be fucked. I would literally soil myself in fear so I am not sure how long I would last. I’d like to think that something inside would take over and I’d become a tough guy, but it just doesn’t sound right me even saying that. I’d quite like to see what being a zombie was like, although sometimes when you switch on day time TV I think that feeling is pretty close to zombification.

WZ: Thanks again for the answers, and in closing, is there anything you want to say to your fans or do you have any inspiring words for those wanting to become a writer?

CW: As advice I would say write what you enjoy, not what you know. Apart from that, I would maybe starting your own publishing house, screw the big wigs! (Down with Thatcher too! Oh, it’s 2012…) To people who’ve enjoyed any of my work, I really appreciate it, after all, it’s what any writer loves.  Thanks again Bill

This entry was posted in Books, Fresh, Interviews. Bookmark the permalink.

One Response to Interview with Chris Wade, Author of Promiscuville: Rise of the Dead