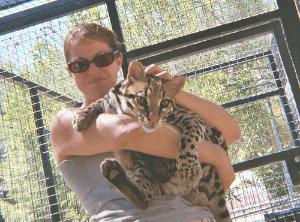 Plague Town is the first in a series of novels from Dana Fredsti, and if this first book is an example, the series is destined for greatness. I reviewed the book earlier, and working through email I was able to ask Dana a few questions about the story, herself, and her writing life. I hope you enjoy her answers as much as I did.

WE ZOMBIE: Dana, thanks for taking the time to answer some questions for us here at We Zombie: I just finished reading your new novel, Plague Town, and enjoyed it so much I wanted to talk to you about the book. I’ve read that you have been an actress, writer, director,  protector of exotic felines, and that you are actually quite good with a sword. Tell us how the Plague Town book was conceptualized – was it created based on your past experiences?

DANA FREDSTI: The actual original concept for Plague Town came from Lori Perkins with Ravenous Romance, who approached me about writing a trilogy that would be “Buffy.  But with zombies.  And different.”  Like the Egg Shen quote says, it started very small.  I jumped at the chance. I definitely used some of my own experiences to build Ashley’s character, as well as the setting and some of the other characters, but much of it was made up on the spot as I wrote.

I also thought in broad strokes about what made Buffy so popular and connect with so many people and tried to incorporate those elements into the book without having any thing that would raise cries of “BUFFY RIP-OFF!” Hopefully I was successful.

WZ: OK, I’ll just come right out and ask this – Is Ashley Parker who you  secretly want to be, deep down inside?

DF: Heck, no!  I really don’t want to be in the middle of a zombocalypse, no matter how seductive the idea of raiding a shopping mall might be. I like the question, though, because a lot of people have asked if Ashley is based on me.  I am very good with swords (of various types), I can shoot a gun (although I don’t have nearly as much experience as I’d like), I  can hold my own in a verbal confrontation if I have to, and I would definitely go back for the cats.  If there’s anything about Ashley I’d love to have as my own, it’s the wild card enhanced strength/agility/senses.  I’m starting to feel the aches and pains of impending age and I resent it bitterly.  Other than that, though, I have to say I really like who I am, where I live, and what I’m doing with my life.  I’d like to think Ashley would mature into someone like me!

WZ: I like the way the first half of the book has two stories going at once that later merge. At the end of each chapter, after following Ashley’s story, we get to read about the action on the zombie front, which you’ve set in italics. It works well in this book – how did you come up with this format?

DF: When I started writing Plague Town, the first thing that popped into my head was the quote by Egg Shen  from Big Trouble in Little China, “That’s how it always begins.  Very small.” Once I ‘d written that down, I knew I wanted to show Plague Town’s “patient zero.”  Maggie and her family are the beginning of the plague and I grew attached to the idea of following them on their undead journey. I almost kept Maggie alive (in a zombie sense) till the end of the book, but decided other stories needed to be told, not just hers.
Also, the problem with writing in first person is you only have the main character’s point of view, so I wanted a way to show what else was happening in Redwood Grove and thereabouts.  So the italicized “interludes” became a way of doing that.

WZ: Where did you get your military knowledge, for example, knowing the level of kick an M-4 rifle has compared to other guns?

DF: I pestered friends and family in the military with questions.  I also got tons of info from my wonderful ex, Brian Thomas, who is a weapons handler in films as well as a history buff, and my friend and fellow author T. Chris Martindale, who is a firearms enthusiast (and if you haven’t read his horror novels, you are SO missing out).  I also googled extensively and watched YouTube gun demo videos (sent to me by T. Chris). I still made some mistakes, though, and am determined to get it all correct in Plague Nation.

WZ:  How does your writing process work? Do you have a set time or a certain place where you write? I’ve heard that writing can be lonely, but it seems like it would be fun with all the great characters and stories being imagined.

DF: Well, my idealized writing routine would be something like this: I arrive home after work to find the house sparkling clean, my felines staring up at me adoringly as they clear a path to my office, which is a cozy nook of a room overlooking the ocean. Food magically appears to sustain me as I write for three to five hours every night, the gentle purrs of the cats and some sort of music serving as white noise to drown out any distractions as my
characters beckon me on to tell the tales of their adventures.  I wear some sort of lounging pajamas made of silk, of course, and have character notes and plot points carefully posted on three by five cards, which I move around on the wall until they make sense.  The words flow until interrupted by a delicate yawn, which signals it’s time for bed.

The reality is I get home from work, immediately spend an hour cleaning up over beloved felines as they attack broom, mop and litter scoop because Mom’s home and it’s PLAY TIME!  Then I make some sort of dinner for me and my boyfriend (he chops things, but isnt much of a cook), and throw myself down on the couch in the living room and turn on my laptop. I shoo random cats off my laptop (and lap) so I can work without arms pinned down, turn on music and re-read work from the night before.  I try to coax my characters,
now all missing in action, to come back so I can continue a: chopping through an overgrown jungle of ideas that make no sense or b: wander a barren desert until something, anything, springs to mind and kickstarts the evening’s writing process.  I try to ignore the sound of random cat fights or things falling over in other rooms (do I really want to know what they did? No, I really don’t) and forge ahead until a jaw-dislocating yawn cracks my face in half and I fall face forward on the living room coffee table,
ready for bed. This generally happens anywhere from 9 to 10pm, no matter how into a scene I might be. I go narcoleptic at a certain point and there’s not much I can do about it.

On weekends I tend to start writing at 2pm and go until I can’t write any more. I’d like to start earlier, but the mornings and early afternoon tend  to be relegated to exercise (beach walkies!), household stuff, and catching up on emails and social networking. The rest of the routine (cats, etc.) is pretty much the same.  And it’s not really that lonely because I have the afore-mentioned felines keeping me company, as well as my boyfriend (also a writer), who works on his stuff next to me on the couch. 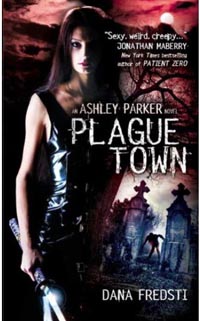 WZ: Dana, I want to thank you again for the interview; you’ve provided some great insight into the book and you as an author. In closing, can you tell us a little about book two – Plague Nation? How about giving us some hints on what we can look forward to.

DF: Plague Nation is going to see the spread of the zombie outbreak outside of the 100 square mile quarantine zone around Redwood Grove into the rest of the United States and adjacent countries/continents. I’m gonna kill at least one familiar character (I say that so callously, but I assure you I will not be happy while killing this particular character) and introducing new ones, and setting up plenty of challenges for Ashley and her fellow wild cards. One of my favorite things to do at any given time is imagine how I’d use a particular place/setting for my books and I’m definitely going to have a chance to put some of my ideas on paper … or in my computer, rather. Sigh.  I just carbon-dated myself, didn’t I?

To learn more about Dana, visit her website or better yet, read Plague Town and find out for yourself why Dana Fredsti is a bright, shining star in the zombie cosmos.
This entry was posted in Books, Fresh, Interviews. Bookmark the permalink.

3 Responses to Interview with Dana Fredsti, Author of Plague Town