Interview with Jonathan Maberry About Dead of Night 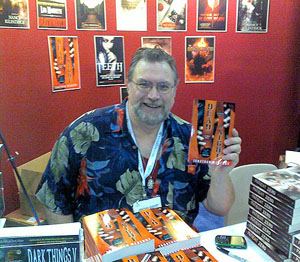 Jonathan Maberry‘s new book DEAD OF NIGHT makes the zombie apocalypse real, with a very scary and plausible story that could happen today. Only Maberry could have come up with this one, and I’m glad he did – this book will remind you how close we all are to becoming rotting corpses.

I was able to ask Maberry a few questions about the book and his life, and I think you’ll enjoy what he has to say.

WZ: You’ve often said that you don’t write about monsters – that you write about people. Do you think one of the reasons zombies are so popular is that we like people stories, not zombie stories?

JONATHAN MABERRY: All great drama –hell, even all good drama—is about people. Not about events or monsters or problems, but about how those things impact the lives of the characters in the story. Moby Dick isn’t about a whale and it isn’t about God. It’s an exploration of how a psychologically damaged man is torn apart by his own disappointment with the universe. It’s about Ahab. And about Starbuck and the others. The whale –not so much. That’s why the whale isn’t actually onstage very often.

That’s certainly true of zombie stories. Look at NIGHT OF THE LIVING DEAD. Most of the movie takes place inside a house. Sure, we cut to scenes of the zombies walking around, eating bugs and banging on the doors, but that’s not the heart of the story. The real drama is a group of disparate people trapped together in a shared crisis. The same goes with both versions of DAWN OF THE DEAD. Most of the story takes place inside the mall. The zombies are the framing story. They are the shared threat, and that same story could place out with a nuclear war, a plague of locusts, Mad Max-style lawless bikers or any other disaster. The point of the piece will always be about how that disaster impacts the lives of the characters, warps their relationships, and strips away their affect.  That is the definition of drama.

Now, all that said, I have a second agenda when I write monster stories. I like to see people who believe themselves to be overwhelmed or helpless rise to their strength and discover their better natures in order to survive. It isn’t about the zombie at the door, it’s about the person who is summoning their courage and gathering their wits in order to deal with that threat.

WZ: I know you learned a lot about monsters (people) growing up. Can you give us a particularly heinous example of a people monster you learned about during those times?

JONATHAN MABERRY: I grew up in an intensely abusive household with a father who was a real monster. Not just to me, but to my sisters and plenty of other people.  Back in the sixties it was easier for a monster like that to hide in the slums of low-income blue-collar neighborhoods in the inner cities. People didn’t talk about abuse. Kids didn’t turn their parents in.

I was fortunate in that, because of studying martial arts, I was able to confront and defeat the monster in my life, and eventually escape that whole environment. I know a lot of folks who are less fortunate.  I think that’s one of the reasons I began teaching self-defense –to kids, to women, to the disabled, and to other groups. I wanted to see more people stand up to the monsters in their lives.

It’s no surprise that I write the kinds of books I write.

WZ: In DEAD OF NIGHT, a doctor works to create a virus that leaves a person’s brain consciously awake while their body rots six feet under. That’s an awesome premise, and something only a sick character would think of.  How did you think of this idea – what were you doing, where were you, etc., when this idea came to you?

JONATHAN MABERRY: I’m a total science geek. I read every book and magazine I can find that touches on areas of weird science. Biology, virology, epidemiology, psychology, genetics…all of it. A few years ago I happened upon a book called PARASITE REX written by Carl Zimmer. A nonfiction book on parasites that was both creepy and brilliant. I don’t think I was even out of the Barnes & Noble with it before I had the idea for DEAD OF NIGHT.  I’d already used a disease pathogen (spongiform encephalitis) in my first zombie novel, PATIENT ZERO [WZ review], so I wanted something radically different but at the same time as scientifically plausible as I could manage.  As it turns out, Mother Nature has cranked out some very, very nasty bugs, bacteria and parasites.  I borrowed some ideas from her –and contacted Carl Zimmer to run them by him—and then I had my science.

After that I had to come up with a plausible reason why someone would manipulate parasites in order to made a bioweapon of this kind. I’d read a lot about the germ warfare of the Cold War era, and that gave me a start.  But I also wanted to include a tie to the Haitian zombies. For one of my earlier projects, ZOMBIE CSU: The Forensics of the Living Dead, I’d interviewed ethnobotanist Dr. Wade Davis, author of THE SERPENT AND THE RAINBOW. He’s the guy who figured out the chemistry used in vodou to create the zombies of that culture. So, I tapped him for some new info and folded that into the book as well.

The creepy thing is…the science in DEAD OF NIGHT is really close to ‘do-able’.

WZ: One of the main characters in the book, Dez, is a cop who is also a seasoned combat veteran. She’s a good person, but not many townspeople like her or her attitude, and that’s the way she likes it. She’s kind of a cross between a crusty detective and a Navy Seal. Did you know someone in your life or have some experience that you drew from when creating Dez? I only ask because she seems so real.

JONATHAN MABERRY: I taught self-defense for women for many years and I’ve seen so many women who have been damaged by life but who rise to redefine themselves and recapture their power. It’s an amazing thing to see. Men rarely appreciate how powerful women can be. I drew on those experiences when creating Dez. She’s one of the most complex characters I’ve put into a book. The hard and thorny outer shell is all scar tissue from a life of terrible loss and pain. Beneath the surface, though, there are wounds that haven’t healed.

That’s one of the things I enjoy most about writing novels like DEAD OF NIGHT. You start with characters that might otherwise be stereotypes, but then you dig down into their lives, you look for the forces –positive and negative—at work in their lives.  That’s where the real story is.

This entry was posted in Books, Interviews. Bookmark the permalink.

2 Responses to Interview with Jonathan Maberry About Dead of Night