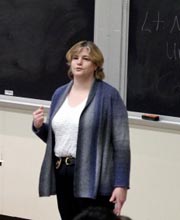 The officer, Lt. Mady Bay made comparisons between campus shooters and zombies, stating that in many ways the two are similar when it comes to defense. “Zombies aren’t thinking, and shooters aren’t thinking,” Bay said. “Both are distracted, and you can use this to your advantage.”

You can read more about the lecture in the student-run newspaper, Pipe Dream. Can’t wait for the next lecture.

This entry was posted in News/Events. Bookmark the permalink.

One Response to Police Officer Speaks About Zombie Defense