Queen Mary I of England – A Zombie 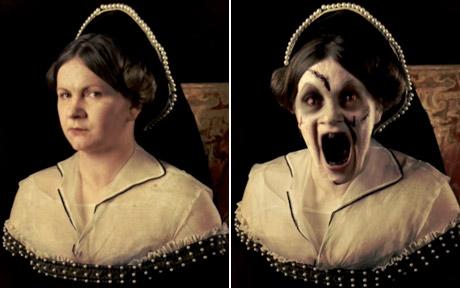 A digital poster of Queen Mary I of England was banned in London because it showed a picture of Mary sitting nicely in a chair and then suddenly she turned into a flesh-eating zombie complete with flesh wounds and red eyes (when did zombies get red eyes?  I don’t know, but they all seem to have them now) and the poster was scaring little children.  The poster was placed on escalators on the London Underground by the London Dungeon, who was promoting a new show called ‘Bloody Mary’ – the daughter of Henry VIII who reigned between 1553 until 1558.  The point of the poster was to remind people that Queen Mary I was a villain who had over 300 religious dissenters burned at the stake during her reign.  She is known as “Bloody Mary”, but her viciousness is often forgotten because of her father King Henry VIII, whose life overshadowed Mary’s.  One person interviewed said that the posters were basically mini-horror movies.  I would say that the posters did their job of promoting the show – good work London Dungeon!

This entry was posted in News/Events. Bookmark the permalink.