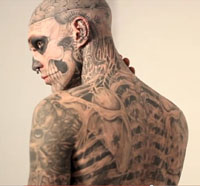 If you haven’t heard of Rick Genest yet, you probably will soon.  Ten years ago, Genest decided to tattoo his body to look like a zombie.  That’s what he wanted to be at the time, and now it’s led him into fashion modeling, acting, and there’s lots more gigs on the way. He acted in a damn cool video for Lady Gaga’s Born This Way, modeled in a new collection from Thierry Mugler, and he spends his time fire-eating, lying on beds of nails, and scored a part in “Ronin 47,” a Keanu Reeves movie coming out in 2012.

AOL News has a great article about him, and there’s also an older article with a lot of pictures in Bizarre magazine where he confessed he was thinking about having his ears removed, as well as an interview on Nightlife.ca.  Enjoy the video – Rick seems talented, humble and nice.  The only problem I see is that when the zombie apocalypse arrives, he’ll need to stay in hiding for a long time.

This entry was posted in Commentary, News/Events. Bookmark the permalink.