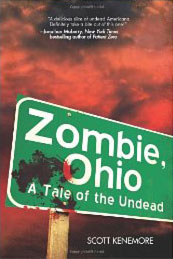 Scott Kenemore’s debut novel takes the zombie genre into a new playing field, one where we’re not really sure if zombies are good or bad, or maybe just a little bit of both. In his book Zombie, Ohio: A Tale of the Undead, Kenemore came up with a grand idea – a zombie wakes up from an apparent car crash with amnesia – he doesn’t know who he is, why he is, or where he is, but most importantly he doesn’t know he’s a zombie.

It’s a crazy brilliant premise, and it’s one that works well for us, the readers. Professor Peter Mellor slowly discovers who he is, who he was, and what he’s now become. It turns out that he was pretty much an asshole, kind of a slimy not well-liked college professor with only one friend, and that friend may have just tried to kill him in a car crash. Zombie Mellor wanders around trying out this new zombie thing, eating brains, killing the living, i.e, doing all the things zombies do during the zombie apocalypse. However, what makes him different from a normal zombie is that what is left of his brain still functions- he can think, plan, use tools and weapons, and seems to be able to command or maybe nudge other zombies into following him across the country killing and ambushing the living. He may have been a bad person while alive, but somehow becomes a zombie with a heart.

For example, rather than killing a young boy he encounters, he feels sorry for the child and finds a way to take the child to a place where he can be cared for. This was a poignant moment in the book, as you visualize a zombie driving a motorcycle with a living boy riding on the seat behind him, wondering why this zombie is not going to eat him.  Kenemore challenges the reader with scenes like these, leaving you scratching your head and smiling – you can’t help but like this zombie.

You’ll like him and feel sorry for him at the same time. As zombie Mellor’s quest unfolds, he discovers a lot about himself and spends a bit of time reflecting on his past life and what a jerk he was. Perhaps it’s not too late to change, and maybe there’s some good he can do now. Mellor winds up wandering around the countryside, gathering zombies, but for what purpose he’s not really sure.  He becomes kind of famous among the living as he is spotted toting a gun, waving to helicopters, and doing other things zombies are not supposed to do.  Part of the book reminded me of Paulo Cuelo’s The Alchemist, where the protagonist is on a journey to discover life’s meaning, and it must be discovered at all costs.

There’s a lot of humor in the book as Mellor interacts with the living in unique and funny ways.  One of my favorites is when Mellor talks to a pilot in a downed helicopter, trying to convince him to allow his zombie following to eat his dead co-pilot in a attempt to save the pilot’s life. Kenemore creates fantastic dialogue from the Mellor character throughout the book, adding depth to this zombie that I haven’t seen in any other zombie novels.

The book combines horror, humor, and mystery in a black film way that makes the book unusual and a joy to read.  There’s plenty of gore, as there should be in a zombie novel, but the other elements of empathy, passion, and creative thinking make this one of those books you’ll want to read through without stopping.  I guarantee you won’t find a more unique story in the zombie genre.  If you are a fan of zombies, you must read this book.  If you are not a zombie fan, read it anyway – you will enjoy it.